A superb introduction to Luciano 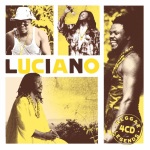 Jamaican singer Luciano has been honoured reggae legend by VP Records and the label has dedicated him a four disc box set collecting three stunning original albums along with a live set.

Some of Luciano’s best work was produced by the late Phillip “Fatis” Burrell and he is behind the spectacular One Way Ticket and the atmospheric Sweep Over My Soul. Dean Fraser produced the Grammy-nominated A New Day, which features a remarkable version of Count Ossie & The Mystic Revelation of Rastafari’s nyabinghi hymn No Night in Zion, and Live was recorded on stage in London at the peak of his career.

Luciano has always been highly influenced by Frankie Paul and especially Dennis Brown, which is certainly quite clear on One Way Ticket. The resemblance with the late Crown Prince of Reggae is striking. And just like Dennis Brown, Luciano is always soulful and gentle, and often spiritual and reflective.

A sublime introduction to Luciano, and it would actually be rather easy to do this exercise again since Luciano has been one of the most prolific modern Jamaican singers. Another four disc box could collect masterpieces like Where There is Life, Serious Time, United States of Africa and Write My Name.