Jamaican hip-hop artist Five Steez follows up on his debut album War For Peace, released in 2012. His new project is an EP titled These Kingston Times. With its eight tracks it’s said in a press release to capture the modern tale of the Jamaican capital.

“I wanted to paint my city the way I see it, and in a way I’ve never heard the story told before in music,” says Five Steez in a press release and continues:

“Since hip-hop’s genesis with DJ Kool Herc, there has always been a Jamaican influence and involvement in the genre, but you’ve never heard about actual life here in ‘yard’, as we affectionately call it. It’s a new perspective in hip-hop, but parallel to that of urban environments worldwide.”

Jamaica is often recognized worldwide for its music, athletes and beautiful beaches, but the country has also developed a reputation of having one of the highest rates of murder and questionable killings by police as well as widespread government corruption. Much of this has historically taken place in Kingston. And these two sides – paradise and slum – are portrayed by Five Steez on These Kingston Times.

The EP drops on October 14, but the first single Deadly off the set is already available, and it’s ready for free download on Bandcamp until the project hits the streets.

Deadly is produced by DJ Crooks, and features a classic hip-hop beat mixed with a vintage reggae sound, a Dennis Brown sample and a signature dancehall chant.

“I had fun with this song because it’s so hip-hop, and it fuses elements from different Jamaican genres so well. I just went in with the flow and, of course, I had to big up people like Heavy D and Chubb Rock, who were also born in Jamaica,” explains Five Steez.

“I’m glad that Five Steez rocked it like he did,” says California-based, Jamaica-born DJ Crooks, and adds:

“It’s hip-hop at its purest, really. This is how we can honour the dynamic nature of the Jamaican music culture, paying respect to reggae and hip-hop at the same time.” 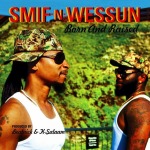 NYC-based hip-hop duo Smif-N-Wessun has showcased Caribbean influences in their music ever since their debut album Dah Shinin’ back in 1995. Over the years Tek and Steele have sampled Johnny Osbourne and collaborated with artists such as Million Stylez, Chukki Starr, Eek-A-Mouse and Jahdan Blakkamoore, long before he wrote hit songs for Snoop Dogg aka Snoop Lion aka Snoopzilla.

Now the duo has presented their most reggae-oriented work yet. The six track – ten on the deluxe version – EP Born & Raised is a strong reggae meets hip-hop project. Tek and Steele boasts and brags over grim reggae riddims produced by Beatnick and K-Salaam with guest singers such as Junior Reid, Junior Kelly and Jahdan Blakkamoore.

Best of the bunch is Shots in the Dark, it’s on a hazy version of the mighty Kunta Kinte riddim. But not far after is the title track where Junior Kelly chants the chorus.

Sound Bwoy Bureill was one of the duo’s most Caribbean moments until this excellent EP, and I hope this isn’t a one-off project.

Natty Take Ova collects twelve tracks spanning one drop reggae, dancehall, ska and hip-hop. A number of the tracks are already released as singles or have appeared on one riddim compilations, for example Easy Skanking on Puff Puff riddim, Money Move on a riddim with the same title and One Chance on Barriers riddim.

Weedy G Soundforce has produced a number of tracks, but onboard is also Pharfar from Denmark and Giddimani Records out of Jamaica.

This album showcases a fresh talent in the same vein as relative newcomers such as Kabaka Pyramid, Protoje and Chronixx, but Damas also shares similarities with a veteran like Lutan Fyah.

Listen to a cut like the bouncy Ghetto revolution to get the vibe.