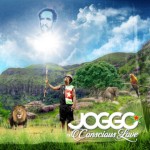 For years have passed since Dutch singer Joggo dropped his excellent debut album Modern Rockers Vol. 1 and now it’s time for its follow-up. And one would guess it would be called Modern Rockers Vol. 2. But no. It’s called Conscious Love and sounds similar to its predecessor.

Conscious Love is produced by Joggo himself along with Reggaeland, Tanntrum Band & Michael Fletcher and Asher E from Black Star Foundation. Manu Genius – formerly one part of acclaimed and successful production duo Not Easy At All – has mixed and mastered the album. His standard is always well above par, and this album is no exception.

This 17 track set offers uplifting and positive contemporary roots with live instrumentation, including some breezy horns. Highlights include the festive Private Performer, the slow Can’t Breathe and the pulsating Come Down.

Definitely another strong reggae album to come out of Europe.

Lots of sun on Jahmali’s We I Open 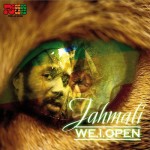 One of my favourite albums from the 90s is Jahmali’s impressive debut El Shaddai, produced by Donovan Germain and released in 1998. This is until now Jahmali’s only studio album, not counting the Bobby Digital produced compilation Treasure Box.

We I Open is Jahmali’s first full-lenght in almost 20 years. This passionate and gifted singer has certainly kept a low profile for long time. But happily enough he has started to record again.

We I Open is infectious to the max and it’s hard – almost impossible – not to start singing along to songs like Courageously, on Reggaeland’s Reggae Reasoning riddim, or Silver Nutmeg, a cut that could easily have been recorded in the late 80s by Aswad or Inner Circle. Check the na-na-na-na-na and you’ll known what I mean.

We I Open equals sun-burnt skin, sand between your toes and salty hair. A cheerful contemporary rub-a-dub set with lots of light to wash your troubles away.

Finally a new album from Jahmali

It took 13 years for the massively under-recorded Jamaican singer Jahmali to drop his second album, third if you count the Treasure Box compilation. Responsible for the new album We I Open is Catalan label Reggaeland.

He started his career in the 90s and voiced a number of hit songs for Donovan Germain, Bobby “Digital” Dixon and Barry O’Hare. He is to date probably best known for songs such as Let Me Live and El Shaddai as well as the Buju Banton combination Mother’s Cry.

Since the 90s he has kept a low profile, but made a minor come back a few years ago when he dropped Blood Thirsty on UK’s Necessary Mayhem Records.

We I Open was recorded in Jamaica, Spain and California and includes twelve tracks produced by Marcus Reggaeland and written by his companion Genis “Genious” Trani along with lyrics from Jahmali.

“We I Open is a gift to the world and a personal contribution towards part of one of the only possible solutions in this spiritual struggle,” says Jahmali in a press release.

We I Open drops on June 1st. 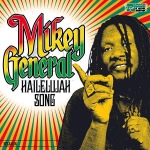 First. I’m not a huge fan of Mikey General’s high-pitched nasal singing style. It’s kind of complaining and moaning and is better suited for singles rather than full-length albums.

Second. This is not necessarily the case with Hailelujah Song.

Third. This is Mikey General’s most solid album in years. And probably also the best full-length I’ve heard from Reggaeland.

It’s obvious that both Reggaeland and Mikey General have been inspired on their journey together and this album definitely showcases the best from both parties.

An average album from Mikey General 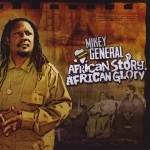 UK-born singer Mikey General has been in the music business for ages. He recorded his first tracks in the UK in the mid 80’s and later relocated to Jamaica where he started to work with the late producer Phillip “Fattis” Burell, for whom he has to date recorded his best material.

When in Jamaica he met vocalist Luciano and together they formed the jointly owned label Qabalah First Music, a label on which Mikey General has put out several albums. The latest is African Story, African Glory.

This 16 track set includes both old and new material recorded for a variety of different producers from Jamaica, Europe and the U.S.

The album offers mostly roots and culture material and includes a few gems, such as the Toussaint combination I Blaze, Innocent Blood on the haunting Sunrise Boulevard riddim and the pounding Pep in Your Step. There are however also a few disappointments, of which the synthesizer drenched Not Impossible and the Lfa Tunde combination All Over the World are the worst.

African Story, African Glory is decent album, but nothing outstanding despite some bright moments. Mikey General’s high tenor voice is also an acquired taste. His style works best in smaller doses, for example singles or combinations, such as the recently released Work with Uwe Banton or the bass heavy King Selassie I Alone for Reggaeland.