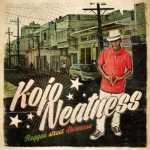 Can’t say I know much about the almost forgotten Jamaican singer Kojo Neatness, but he has recently recorded a gem with Polish production crew Dreadsquad titled Boom Sound.

He also has a fresh full-length album out called Reggae Street Showcase. The set was recorded in France, voiced in Jamaica, and collects six vocal cuts followed by their dub counterpart. The production was crafted by Webcam Hi-Fi’s Fredread, who was responsible for the excellent compilation Feeding My Faith released two years ago.

Kojo Neatness has a haunting and intense vocal style similar to Linval Thompson, Barry Brown and Tristan Palma. And his voice flows over contemporary rub-a-dub riddims, sometimes with tsunami-like bass lines, particularly the dub versions and cuts like Deep Dub and Rudeboy & Dub.

Reggae Street Showcase is Kojo Neatness’ first album ever and it took a few decades and a producer and a label from France to get it out there.

Earl 16 and Manasseh tear down the walls of the city

A new release from Nick Manasseh is always exciting and highly welcome. He’s one of the most consistent UK producers and now he has worked with Jamaican veteran roots singer Earl 16 on the showcase album Walls of the City. The first in what seems to be a series.

Walls of the City is excellent throughout, especially the title track with its deep and growling bass line and the uplifting Ease Up with its bright horns. Two very different tracks, but equally tasty.

Hopefully another set is due soon, but until then this album will be getting a lot of spins. Available now on LP and digital platforms.