Reach out and listen to New Town Kings

Eight-piece British ska band New Town Kings released their third album Reach Out a few months ago. It offers a more progressive take on ska and reggae compared to their previous sets M.O.J.O and Sound of the New Town.

With Reach Out the band serves up a fresh take on high-powered ska and rootsy reggae, including an inspired reworking of Sylford Walker’s dread roots anthem Burn Babylon, complete with vocals by the man himself.

New Town Kings has also recorded their own anthem – the smoothly enraged Borderline where they tackle migration and attack current political policy. And even though New Town Kings doesn’t shy away from politics and attacking the social elite, they can also handle lighter moods, for example the breezy Fine Fine Fine or the soulful British Summer, a track that can handle any weather. It will lift you up during rain and keep the party going on a sunny day. 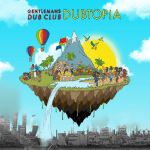 They are famous for their vital live performances and this energy has successfully been channeled onto disc. And guest performers like Lady Chann, Taiwan MC, Parly B and Eva Lazarus make sure that Dubtopia is sound system friendly with fierce vocals on a cut like Fire In The Hole.

With its upbeat sound, multi-part horns, sonic wizardry and sweet vocal harmonies Dubtopia is a bona-fide attention-grabber – from the dreamy Your Light via the smooth Dancing In The Breeze to the stomping Taiwan MC combination Take Control.

The Skatalites brought the sound of Jamaica to the world. From the early 60s up until the mid-60s this outfit – with legendary instrumentalists such as Don Drummond, Tommy McCook, Roland Alphonso, Jackie Mittoo and Ernest Ranglin – defined ska and the new and exciting sound of young Jamaica.

The Skatalites played on thousands of recordings during their relatively short-lived period. They recorded as a group, as individual musicians and as backing band for a variety of singers, including The Wailers, Delroy Wilson, Ken Boothe, Alton Ellis and a truckload of others.

Many of their own recordings have been well-compiled over the years, but they have recently been highlighted once again with three new compilations – one coming from UK’s Soul Jazz and two coming from Studio One Records and Yep Roc Records in the U.S.

These albums – Foundation Ska, Don Cosmic and Independence Ska and The Far East Sound – Original Ska Sounds From The Skatalites 1963-65 – collect mostly instrumentals released as a collective or as individual performers.

These three albums bring together aspects of jazz, latin, R&B and to some extent nyabinghi. It’s intense with a heavy dose of energy and complexity. Check classic such as Guns of Navarone, El Pussy Cat Ska and Simmer Down with The Wailers.

This is a history lesson and showcases The Skatalites unrivaled position in the history of reggae music.

Jamaican musician, producer and studio owner Byron Lee is sometimes overlooked in the history of reggae. He had a middle class background and the sounds coming from him and his band The Dragonaries were often labelled as uptown and custom-made for tourists. Maybe his music was uptown, but in retrospect many Byron Lee’s productions often sounds as authentic as many other cuts recorded in the 60s.

There are plenty of dance floor fillers and the tempo is high – some might argue it’s frenetic – almost throughout the full album, but there are a few slower, organ-lead jams collected as well.

Byron Lee has been a pivotal figure in reggae and played a crucial part in expanding music from Jamaica beyond the Caribbean. He was part of taking ska to the U.S. and his studio Dynamic Sounds became a major hub for both local talents and major international acts like Eric Clapton and The Rolling Stones. And Uptown Top Ranking spotlights an entertainer and an entrepreneur that pioneered the Jamaican music industry. 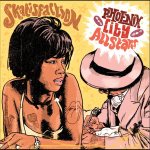 On Phoenix City All-Stars‘ debut album Two Tone Gone Ska they did blazing ska versions of material by The Specials, The Selecter, The Beat and Madness. Now they have another cover album out, but this time they have taken on a giant of rock music – Rolling Stones.

Phoenix City All-Stars are far from newcomers and they know their ska and their Rolling Stones. The band comprises members of Pama International, The Sidewalk Doctors, Kasabian, Intensified, Dub Vendor All-Stars, The Loafers, Big Boss Man, The Bongolian and The Delegators. On vocals they are also supported by the deejay Oxman and the singer Freddie Notes, known for the smooth Montego Bay released in 1970.

Skatisfaction collects ten tracks, including hits and lesser known tracks from the mighty Rolling Stones vaults. Phoenix City All-Stars have treated them with respect and revitalized them in scorching ska and rocksteady versions.

And these frantic and storming cuts hold up well against the popular originals, especially the instrumental cut to Under My Thumb, where a haunting organ provides the original vocal line, and the honeyed Sweet Virgina, also an instrumental, and with a smooth saxophone replacing the singing.

This album has loads of raw attitude and collects driving ska and killer early reggae. Rolling Stones should be satisfied with such a well-crafted tribute set.

UK-based singer Alpheus teamed up with renowned Spanish producer Roberto Sánchez about four years ago and in 2011 the acclaimed album From Creation was released. It was a step in a new and different direction for both Alpheus and Roberto Sánchez.

From Creation was not the usual European one drop or hard Channel One roots reggae. It was something completely different – soulful rocksteady and swinging ska.

Now this duo has a new album – Good Prevails. It collects 14 tracks, of which two are melodica instrumentals. It also offers a mix of fresh originals and re-vitalized versions of riddims created by Coxsone Dodd, Phil Pratt and Winston Riley.

Good Prevails hits the streets on LP and CD on April 28. If you can’t wait to hear how it sounds, check Our Strength taken from the album.

Wouter Rosseel – guitarist in Lee Perry-influenced Belgian reggae band Pura Vida – has another project, a project with hardly any Lee Perry influences. The members of Jamaican Jazz Orchestra are instead worshipping The Skatalites and the early sounds of Jamaica led by Don Drummond, Ernest Ranglin, Tommy McCook and others.

And this ten piece band has recently dropped a self-titled six track EP free for download over at Soundcloud.

When listening to it my foot starts tapping and my head starts nodding reflexively. They have a tasteful mix of reggae and ska rhythms spiced with a jazzy brass section and a groove-oriented organ player.

It’s loose, funky and fun and well-worth checking out, even though I could have made it without the rapping on G13.

Reissue giants SoulJazz Records have once again opened the mighty Studio One music vaults. This time for a second ska compilation.

The first compilation – put out in 2004 – was titled Studio One Ska and featured classic vocal and instrumental tracks from The Skatalites, Bob Marley and The Wailers, Delroy Wilson alongside rare tracks from the likes of Ken Boothe and The Maytals.

Studio One Ska Fever! is a slightly different affair. It still features a mix of vocal cuts and instrumentals, but it collects less classic tracks and a heavier dose of obscurities, for example gems like Jackie Opel’s Old Rocking Chair and the Soul Brothers’ take on The Skatalites’ classic Freedom Sounds.

The tempo and the quality of the songs are of course high throughout the 18 tracks recorded between 1964 and 1967. It’s upbeat and joyous, just listen to the Bob Marley lead Climb the Ladder with its gospel-tinged chorus or The Clarendonians’ Rudie Bam Bam with honking horns and memorable piano. But it is also funky, as in Jackie Mittoo’s organ instrumental Jump For Joy, recorded when he hadn’t turned 20 yet.

This is yet another strong release from SoulJazz and Studio One and it shows the sheer brilliance of the elite musicians that were The Skatalites. For a period of about two years their sounds ruled Jamaica and Ska Fever! shows why.

A jolly good time with The Lee Thompson Ska Orchestra

Saxophonist Lee Thompson and bass player Mark Bedford, two founding members of Madness, have a new band together – The Lee Thompson Ska Orchestra. The project started out a few years ago with a few gigs and it worked out so well that the band decided to record an album together with the always reliable vintage-sounding producer Mike Pelanconi aka Prince Fatty.

This is old school ska at its best. Prepare yourself for some good time stomping – knees up, arms rocking sideways and a huge smile on your face.

A driving album full of fun

French nine piece band Jim Murple Memorial has been together in various constellations for 17 years and has recently released their ninth official studio album Take Your Flight, Jim!, collecting 16 tracks aimed a starting any party around the globe.

Their sound is a melting pot of ska, rocksteady, calypso, boogaloo and Jamaican and American R&B. They’ve might have listened to an equal amount of Bo Diddley, Fats Domino, Willie Colón, The Skatalites, Slim Smith and Laurel Aitken.

It’s fun, passionate and soulful and unless Tony Soprano has put your feet in wet concrete, you’re guaranteed to at least tap your toes to this full and swinging sound with upright bass, shuffling piano, funky organ, rampant horns and cheerful, but also mild at times, vocals courtesy of no less than five lead singers, who mostly sing in English.

Included are also a number of explosive and catchy instrumentals, where the musicians present their respective skills in a party-styled fashion.

Take Your Flight, Jim! is currently only available via the band’s website and over there you decide the price yourself.