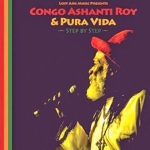 Belgian band Pura Vida has managed to create a sound almost identical with what Lee Perry did at his famous Black Ark studio in the mid-70s. It’s swirling, sweaty and raw, and has been a successful recipe on a number of albums over the past years.

Pura Vida’s latest set is yet another combination with The Congos, and this time with Congo Ashanti Roy, one of The Congos’ lead singers.

Step by Step collects 17 cuts, of which five are dub versions and one is an instrumental with acclaimed trombone player Tommy Tornado taking lead. It offers well-crafted and live-played riddims as well as interesting arrangements, especially when it comes lead and back-up singing.

But, the problem with this set also lies in the vocals. Because Congo Ashanti Roy isn’t at the top of his game. He suffers occasionally from pitch lapses, and is off-key several times. A pity since he has emotional intensity, an intensity particularly showcased on the skanking and swinging Be True to You with its infectious sing-a-long chorus.

Even though Congo Ashanti Roy’s singing isn’t always up to par, he’s still a powerful exponent of vintage-flavoured roots reggae.