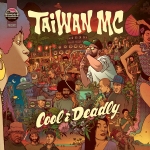 The first five cuts are superb and Taiwan MC, together with a number of collaborators, spit lyrics over fierce hip-hop-fused reggae beats. The infectious Your Lovin’ – featuring the honey-voiced Anouk Aita – and the tongue twisting Dem a Wonder are particularly tasty.

From there on the album gets more diverse with Taiwan MC exploring other styles with great result. Bubblin’, also with Anouk Raita on vocals, comes with nice tempo-changes, Wobble Ballad kicks in a brutally wobbling bass line complemented by blazing horns and a lonesome trumpet, and the bouncy and Major Lazer-influenced Catalina, the first single off the album. This cut could put any dancefloor on fire.

Entertaining, creative and innovative. This album never gets boring or dull. 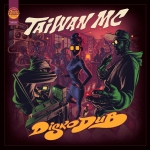 Almost two years after the release of his Heavy This Year set French deejay and singer Taiwan MC returns with a second EP. Diskodub is an eight track effort and a hybrid of funky digital reggae and futuristic contemporary dancehall complete with psychedelic dub effects and a haunting melodica.

The set is produced by Soap, Chinese Man, Dreadsquad and Manudigital with lyrics written by Taiwan MC when on the road. Each of this producers have their own distinct style, but it all blends together nicely.

Taiwan MC also chats over a bouncy version of King Tubby’s brutal Tempo riddim and Manudigital’s remix of Blaze It Up pays tribute to the classic Sleng Teng riddim.

The up-tempo and explosive Diskodub is an invitation to a digital reggae dancehall party.