Stop and search out The Amharic’s new album 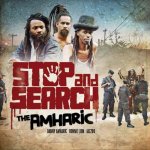 The UK has over the years produced several successful roots reggae outfits, particularly in the 70’s with bands such as Aswad, Steel Pulse and Black Roots. They were however at their best more than 30 years ago and since then not many bands have evolved on the island.

One band that waves the red, gold and green high and proud is The Amharic, a three piece band from Brixton. Since their inception in the 90’s they have been far from prolific, but have managed to put out four strong albums. Their fifth was sneaked out in December last year and sadly has very poor distribution and the efforts to marketing it seems to have been close to zero.

This is very unfortunate since Stop and Search is a brilliant 13 track set of hard-hitting roots reggae with echoes from the late 70’s and early 80’s. It was recorded in Jamaica and the UK and is mostly based on live instrumentation along with socially conscious lyrics dealing with issues such as war on drugs, terror, the legalization of marijuana, police brutality, faith and cell research, with the controversial cloning of Dolly the sheep as an example.

Stop and Search is only available on CD and only from Irie Records, but don’t let the poor distribution or the singular format stop you from searching out this album. It’s well worth the effort.