Mellow and meditative on G.T. Moore’s The Harry J Sessions 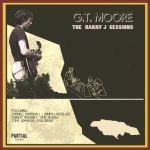 Singer and guitar player G.T. Moore has been in the reggae business since the early 70s when he formed his band G.T. Moore & The Reggae Guitars. He has recently discovered a bunch of tracks he recorded in 1980 at Harry J in Kingston, Jamaica, while working with Lee “Scratch” Perry. These cuts have now been released on the excellent album The Harry J Sessions.

The set collects eight tracks – four vocals and four dub versions. Only one of these – the superb album opener Utopia – has been previously released. All tracks have now been given a mixing treatment courtesy of Dougie Wardrop from Conscious Sounds.

All recordings carry a meditative vibe and the horns on Utopia and its dub version Reformation Dub are spellbinding to say the least. Jerusalem, and its dub counterpart Temple Mount Dub, comes with a mesmerizing guitar and an ethereal melodica.

The bass lines on Harry J Sessions are lethal and especially the one carried out on Turn the Wheel Dub. This one gives a new meaning to the word hypnotic.