Tag Archives: The Return of Vibronics

Vibronics return with another earth-shaking set 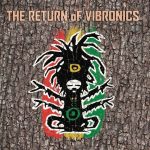 The Return of Vibronics is militant with intense energy. As usual with Vibronics one might add. The vocal cuts are haunting, dark and dread and the dub versions are crammed to capacity with bass heavy sound system flavour.

This is UK bass music culture of the highest order. Sometimes almost diabolical, like North & South, and sometimes a bit brighter, like Heartbeat, even though it has an apocalyptic bass line.