Gentleman has come a long way

Successful German singjay Gentleman has gone from dropping hip-hop and conscious roots via eclectic dancehall to reggae-tinged electronic dance music. Over the years he has toured the world and recorded extensively in Jamaica and Europe. Reggaemani caught up with him while he was in Jamaica making music videos and promoting his latest album New Day Dawn.

Gentleman is probably the most successful European reggae artist today, even though the European reggae scene is strong at the moment with several artists making a name for themselves in the Caribbean and the U.S. Gappy Ranks, Million Stylez, Randy Valentine, Patrice, Jahcoustix and Lion D are some of the singers and deejays that come to mind.

But the reasons behind his own global success isn’t something Gentleman thinks about on a daily basis.

“Otto Tilmann is my real name and I don’t play a role. I have a passion for music and a hunger and strive to develop myself. And one of the key things is the right surroundings. No man is an island and I have a sense for good people, people that give me energy and people that I can learn from,” says Gentleman, and continues:

“I don’t know where I’m going and I’m surprised to have come this far. I’m not the best song writer and not the best singer. I just love music. I make music for myself.”

Gentleman’s success earned him a contract with a major label in 2010 and last year he dropped his sixth album New Day Dawn, his second on Universal. Being signed to a major label has given him a lot of muscles in terms of marketing and promotion – very important these days when anyone can start a label and distribute and sell music via the Internet.

Working with the right people
I reach Gentleman on his mobile phone, while he’s on a break from shooting a music video in Kingston, Jamaica.

“This is where it’s happening. It’s the motherland of the music I do. It’s good for the motivation to be here and I also get some great feedback here. Music is very important in Jamaica and it’s on a natural level,” explains Gentleman.

For a European – or anyone not from the Caribbean – it’s hard to get attention on Jamaican radio, something that UK-based producer Frenchie talked about in a recent interview with United Reggae. This has not been a big issue for Gentleman though.

“I receive some radio play, but I’ve never really worked hard to get it. I’m just glad my music gets played sometimes. If you want to be accepted, if that’s your goal, it will be hard. I never strived for it and I’ve never aimed to be successful in Jamaica. I’ve spent a lot of time in the studios here, and with the right people. But music comes first and people second,” he states.

Gentleman has previously worked with several big producers, both within reggae and from other industries as well, for example Benny Blanco, who has worked with superstars such as Britney Spears, Justin Bieber and Katy Perry.

New formula
On New Day Dawn he has tried a new formula – doing most of the production himself.

“I was ready for it and wanted to do it different this time. Different compared to previous albums. I knew exactly how I wanted it to sound and with a vibe like that you can’t compromise,” he explains, and continues:

“This time every riddim was suited for me and I didn’t have to compromise or anything. I worked with different musicians, like the drummer of my band, and together we finished the ideas I came up with. It was all natural and I knew where I wanted to go. If I would make an album with different producers again, it has to be right.” 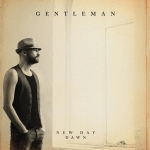 The end result is a slick and clean album with weeping acoustic ballads and house-inspired dancehall. But one drop reggae is not completely left out of this contemporary cocktail. Another Drama, with its dub mixing and crying saxophones, or Road of Life, with its catchy na-na-na, are two fine slices of modern reggae. New Day Dawn certainly stands out compared to his previous albums, partly thanks to its more mature approach.

“The album is versatile. On one hand you have handmade roots reggae, and on the other hand you have dancehall and an electronic sound. It’s a lot of passion and love in the project. I love it and a lot of the songs also work well on stage. I had imagined how I could deliver on stage and the result is very alive,” he explains, and continues:

“I grow with the times. I don’t want to do the same thing over and over. Roots is my first love and probably my last, but I don’t like categories. Roots reggae is at the center of everything.”

Follows his inner voice
For Gentleman New Day Dawn stands for a new beginning and a new opportunity, it’s just a matter of attitude.

“There is a revolutionary dynamic in this world. Just look at Cairo. There was a revolution in Egypt and this has been a significant experience for me. Young people striving for change, striving for a new episode. It’s very positive, even though there still is a lot of darkness out there,” he says.

Gentleman strives to do good and is a very positive person, something that’s also reflected in his lyrics.

“Every feeling I have flows through my music. There are days when I go through life reaching nowhere. It can be depressive, but two days later it’s a new vibe. It’s just a matter of decision and perspective, what you see and what you feel,” he says, and adds:

“I follow my inner voice and I’m not thinking about what I’m doing, I just do it. Sometimes it’s right, sometimes it’s not.”

Pure Gentleman
Gentleman has a history of voicing a lot of combinations with other artists. On Diversity, for example, he shared vocal duties with Christopher Martin, Tanya Stephens, Red Rose, Million Stylez, Patrice and Sugar Minott. He has also dropped an album together with Richie Stephens. But on New Day Dawn it’s just Gentleman.

“My first album had no combinations either. This time I didn’t have a plan, it just happened. I just loved the songs and loved the idea more and more without any features. I didn’t need it this time,” he says, and adds:

“I love to work with other people, but it was time for a pure Gentleman album.”

“A change is in the making”
15 years have passed since Gentleman put out his debut album Troddin’ On, a set that offered a potent mix of hip-hop and dancehall. In 2002 his perspectives had changed and his breakthrough album Journey to Jah was released. This album showcased a new and rootsier side of Gentleman with guest performers such as Luciano and Capleton.

Now, twelve years after his breakthrough, things are different. The music industry has undergone huge changes and Gentleman is a superstar in his native Germany.

“I’m still the same and I have the same direction, but the world is much more complex and things are not black or white. It’s not as easy today as it used to be. I didn’t think too much in the beginning. Today, I know what people want, I’m a better song writer and I have process. Some lyrics from back in the day would not do it today,” he explains and adds:

“The whole music business and how we consume music has changed. It’s not better or worse today, it’s just different. Good or bad, I don’t know. But the morality is gone. People don’t spend money on music anymore which makes it difficult for newcomers. There is a lot of talent, but no opportunities. Labels don’t work the way they used to. They are looking for that one hit and it’s not easy. But I think a change is in the making. It’s moving in cycles.”