Arkaingelle gets the Zion I Kings treatment on Tru Da Fyah 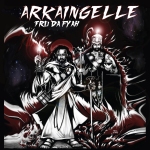 Guyana-born singer Arkaingelle dropped his debut album O’Pen back in 2008 and since then he has only released a couple of tracks here and there, including excellent efforts on the compilations Nyacoustic Chants and Jah Golden Throne. Both those sets were put out via Zion High Productions and they are also responsible for releasing his second album Tru Da Fyah.

The album is crafted and produced by Zion I Kings, one of the strongest forces in contemporary reggae music with their signature smooth and melodic audio landscape. And by just glancing at the striking sleeve you get a strong hint on what this album is about – spiritual Rastafari lyricism and devout chants and praises of the Most High.

Just as many other sets produced by Zion I Kings, this album is coherent both musically and lyrically. Arkaingelle sings – or chants in a more melodious Akae Beka style – over expertly produced riddims. Just listen to a cut like No Race with its lingering synth melody, Children of the Most High with its dubby audio landscape, the nyabinghi-tinged Ancient of Days and skanking Herbalist. This is music with a message.