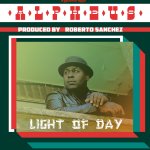 Give thanks for Vin Morgan’s debut album 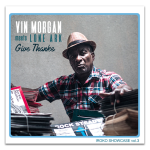 In the course of reggae history many great singers managed to release only a handful of singles or so. One of those is former Soul Defenders lead vocalist Vin Morgan, who also played keys and drums with the band. However, Soul Defenders is probably not known for their own material, but for being one of the backing bands at Studio One. And they played on several immortal cuts, including Freddie McKay’s Picture On the Wall and The Abyssinians’ Declaration of Rights.

Vin Morgan resurfaced in 2014 when he cut the single Resilience with bass man Boris Gardiner. And now about 50 years after he started his music career his debut album has landed. It’s not a collaboration with Boris Gardiner though, but with producer and engineer extraordinaire Roberto Sánchez and his Lone Ark Riddim Force.

Give Thanks is another showcase album from the Sánchez and Iroko Records camp. Six vocal cuts are followed by their dub counterpart. Most riddims are known from before if you have the two previous showcase sets – Noel Ellis’ Zion and The Viceroys’ Memories – and they suit Vin Morgan’s falsetto singing perfectly.

His voice sounds remarkably fresh. Expressive and emotive. Just as the dub versions and the horn arrangements. Check the militancy of a cut like Can’t Complain Dub with its smattering percussion, haunting keys and fanfare like horns. Best of the bunch is however the bright and uplifting Gimme the Vibes.

Keith & Tex recreate the sounds of the 60s on new album

Same Old Story is maybe a telling title since the music is classic rocksteady; a genre that made Keith & Tex stars in Jamaica and abroad in the late 60s. The album collects only original material and could very well have been recorded and issued back in the days.

The harmonies are tight and many of the cuts have a melancholic feel to them. And the duo covers themes from broken hearts to the refugee crisis in Syria.

Once again Roberto Sánchez shows that he can create hit sounds for any (veteran) reggae artist. This is music for music lovers.

I Kong’s superb Pass It On

Chinese/Jamaican roots singer I Kong aka Ricky Storm – cousin to the late producer extraordinaire Leslie Kong and formerly a member of vocal harmony group The Jamaicans – is back with a new album, only a year after its predecessor A Little Walk. And even though I Kong is in his 60s today, he’s at a productive peak with two albums released over a little more than a year.

Pass It On is just A Little Walk recorded together with Swiss roots band Najavibes between Switzerland and Jamaica and mixed by the immensely talented Roberto Sánchez at his studio in Spain.

This recipe has proven fruitful and it works yet again. Actually even better this time, because Pass It On is more straight-forward and is both superb and sublime with its powerful rhythms and infectious melodies mingling effortlessly with I Kong’s soothing singing.

His voice has retained its tone and character and on a cut like the slightly discofied Keep Grooving he dives into a deep and gritty soulful groove letting his voice loose over handclaps, bright horns, joyous backing vocals and a pulsating riddim section.

If A Little Walk was a triumphant return for I Kong, this album certainly cements his arrival after almost ten years out of the spotlight.

Tagged as I Kong, Najavibes, Pass It On, Reggae, Roberto Sánchez

A reggae star emerges from Madagascar

Africa has a fast rising reggae star. His name is Bi.Ba and he’s from Madagascar. He’s actually been around for quite some time and on his brand new album Massavana he has collaborated with Spanish musician, producer and mixing maestro Roberto Sánchez and his Lone Ark Riddim Force. When Roberto Sánchez is involved satisfaction is usually guaranteed. And this is the case with Bi.Ba’s second album.

Bi.Ba has a touching and soothing tone in his voice and the production is heavily influenced by 70s Jamaican roots. Roberto Sánchez has given the set a feel of authenticity with vintage vibes and live instrumentation complete with beautiful harmonies – listen to Mr. Babylon – and dub versions to four of the cuts.

A stunning album from an artist that will put Madagascar on the reggae road map.

Sounds From the Ark is an wonderful ode to nature

French label and sound system Blackboard Jungle has once again put out a killer release with help from France’s Rockers Disciples and Spain’s Roberto Sánchez along with a few other key musicians.

Sounds From the Ark is a stellar 12 track album where wonderful instrumentals rub shoulders with killer vocal cuts and lethal dub versions. The set is inspired by nature and the classical elements, and with that backdrop a team of musicians, including Rockers Disciples, The Producers, Don Fe and Prince Jamo, created a number of instrumental pieces that later formed into Sounds From the Ark.

The inspiration for this album is clearly showcased by the song titles – Water of Life, Fire Rises and Mystic Wind – and the set is organic taking the listener on a journey from the depths of the oceans to the mountain tops.

A beautiful album. Just as nature.

The Viceroys back in full glory

About five years ago I had the opportunity to interview Spanish producer, mixing engineer and musician Roberto Sánchez. In the interview he mentioned a few dream projects and one of those was working with Jamaica harmony trio The Viceroys. That’s no longer a dream and the project has materialized.

Memories is a the second showcase album on Iroko Records produced by Roberto Sánchez along with Iroko’s own Herve Brizec, and it follows Noel Ellis’ Zion.

This brand new album includes six beautiful vocal cuts directly followed by their ground shaking dub counterpart. Just listen to All I Dub. When the bass line drops it’s like you want to shed a tear.

And just like all other productions coming from Roberto Sánchez and his Lone Ark Riddim Force this sounds vintage to the bone. This could have been a forgotten gem recorded by The Viceroys at Channel One back in the late 70s.

This is heavy roots. This is roots full of culture and consciousness. Just like way back when.

Noel Ellis, son of the late and great Jamaican singer Alton Ellis, dropped his self-titled debut album in 1983. It was recorded in Canada and overlooked at the time of release. Fortunately it was picked up Light in the Attic Records and reissued almost ten years ago. Now – more than 30 years after the release of his debut – Noel Ellis has finally put out his second album Zion.

Zion is a coherent and classic set with pleasant and heavy dub versions where Roberto Sánchez has put the smattering percussion in front of the mix, as shown on the deep Jah Dub, the version to the excellent and devout Jah Love.

Noel Ellis has a versatile voice with a melancholic tone and album opener Zion presents a mode where his graceful singing sounds a bit nervous, while he on the cavernous and slow Reggae Music shows a more powerful style. On I Know he actually sounds a little like the great Ken Boothe, grittiness excluded.

Roberto Sánchez has previously recorded a number of vintage reggae singers to wide critical acclaim. And Noel Ellis’ second album can definitely be filed next to soon-to-be-classics like Milton Henry’s Branches and Leaves and Earl Sixteen’s Natty Farming.

A rootikal showcase from Roberto Sánchez and The Rockers Disciples

And just as the first volume, Blackboard Jungle Showcase Vol. II comes with 12 tracks and each has a hard and driving dub version.

It’s a stellar set. Even better than the first volume. Roberto Sánchez is a gifted vocalist with a smooth, yet passionate, style. And the riddims, oh the riddims. They are rough and touch and sounds like they’re directly lifted from a Channel One album recorded in the late 70s, when roots reggae started to give way for early dancehall.

The set is magnificent from start to finish, but stand-out cuts include the groovy Rising Light, the militant Some More (Politricks), the dread Tell it to the Children and the galloping Fire.

Excellent vintage-sounding roots and dub from some of Europe’s finest musicians.

A stellar set from Earl 16 and Roberto Sánchez

You have to be impressed by Spanish producer, mixing engineer and musician Roberto Sánchez. A few weeks ago he and Alpheus dropped a sweet and soulful rocksteady album. Now, he’s responsible for another set, but in a completely different vein.

Just as several other notable album releases from Roberto Sánchez and his A-Lone Productions, Natty Farming is a showcase set with six vocals and their six dubs. Three songs are originals and three are cover versions.

Natty Farming is organic and analogue. It’s warm and Earl 16’s pleading voice floats over the throbbing and syncopated riddims with elegance.

I have yet to hear a below par album or tune from Roberto Sánchez and his crew.