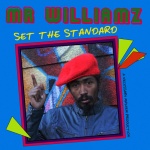 UK deejay Mr. Williamz has over the years mostly recorded for fellow Londoner Curtis Lynch of Necessary Mayhem fame. And now the pair has released a full-length set.

Curtis Lynch has managed to create what every artist wants – a signature sound. It’s easy to recognize a Curtis Lynch production thanks to its heavy wobbling bass lines, sparse arrangements, grim organs and clever samples. He has created his own contemporary take on 80s dancehall.

And Mr. Williamz’ debut album Set the Standard has all those ingredients.

Mr. Williamz chats old school style over the 15 tracks, of which four are previously unreleased. It’s hypnotic and engaging at the same time. He deejays about ganja and romancing over tough beats, fresh relicks and tons of sonic wizardry.

With this album Mr. Williamz and Curtis Lynch set a new standard for how contemporary dancehall can sound in the 21st century. 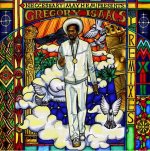 When normal fans devote time and money to build web sites or write fanzines for their favorite artists, UK-producer Curtis Lynch produces a 15 track album dedicated to one of his heroes– the late Gregory Isaacs. And when looking at the cover sleeve it’s obvious that Curtis Lynch is not just any fan since the Cool Ruler is pictured as some kind of angel on stained glass.

On Gregory Isaacs Remixes Curtis Lynch has re-done and re-shaped eleven tracks recorded by Gregory Isaacs for Jamaican producer Augustus “Gussie” Clarke. The album includes a total of 15 tracks and collects classics such as Private Beach Party and Let Off Supm, but a number of tunes are rather obscure since they are taken from Gregory Isaacs’ less creative period.

Curtis Lynch has re-played most of the music and only sampled a few bits. He has also pumped up the tempo and added the kind of ill bass lines your parents doesn’t want you to hang out with. The voice has however been affected by the changed tempo and Gregory Isaacs sounds a bit drunk on the monster hit Night Nurse.

On cover albums or remix sets it’s always a tough task to be better than the originals, even though that’s probably not always the intention of the musicians or the producers. And the tracks on Gregory Isaacs Remixes are not necessarily better than the original versions, they’re just different with a contemporary and more electronic sound.

I’ve to confess that I’m not a raving Gregory Isaacs fan. I like most of his cultural and roots-oriented material, but a large part of his output is too smooth for my taste. And with this new album Curtis Lynch has given his work a new edgier style, which is a good thing.

In an interview Curtis Lynch recently did with Angus Taylor for United Reggae he said that his dad and his stepdad liked the album and that Gussie Clarke was pleased. Well, I’m too.

Macka B is an investigative reporter

Macka B is one of the most influential UK reggae artists and is a veteran with a career spanning over three decades. But he hasn’t slowed down. Far from it. In 2012 he has put out two albums, and I had the opportunity to speak to him about his latest one – Rasta Soldier.

It was produced by Curtis Lynch and features Macka B’s clever and humorous takes on reality set to grim beats with ground shaking bass lines.

Good humor has always been a key ingredient for Macka B, but he also wants to reveal the harsh realities many people face. Like an investigative reporter he’s taking the viewpoint from the ordinary man in the streets and will continue his quest to tell the truth until we live in a perfect world.

Check the full story over at United Reggae.

A fruitful musical relationship between Macka B and Curtis Lynch

An encounter at Peckings record shop in London last year between Necessary Mayhem’s Curtis Lynch and veteran deejay Macka B was the starting point for a fruitful musical relationship.

It started with the release of Our Music on the Gorilla riddim, a tune now included on Macka B’s brand new six track showcase album Rasta Soldier for Necessary Mayhem.

Rasta Soldier includes four previously unreleased tracks and is Macka B’s second album this year, and he once again shows his witty and striking social commentaries, taking on subjects such as racism, modern technology, violence and Rastafari.

The mood is classic Lynch with beats that are grim, introspective and dark, clearly manifested by the dub versions following each vocal.

Macka B and Curtis Lynch have managed to create a musical backing very well-suited to the harsh reality many people face everyday.

Rasta Soldier is now available on vinyl and will hit the download stores on August 21. 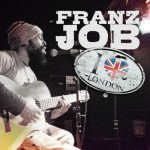 I Love London is produced by Franz Job himself and available for free download over at Soundcloud. It hosts five tracks, including a re-make of Living in the Land Glory, originally cut for Rebel Lover Boy.

Highlights include the calls for non-violence and unity and equality in Brother Brother (Drop Your Guns) and It’s Enough as well as the skanking and rocking Wrapped Up in Jehova with its catchy oooh’s.

Head over to Soundcloud immediately and grab yourself a copy.

Future Cuts is the third compilation from UK label Necessary Mayhem led by producer Curtis Lynch. It offers a mixed bag of old and new material by several familiar singers and deejays from Europe and Jamaica.

The title of the album refers to the idea of giving a glance of what’s currently happening around the label. And there are some really interesting tunes and riddims involved, telling tales of a promising future.

Most promising is the severely under recorded Jamaican singer Jahmali and his grim Blood Thirsty, on a riddim inspired by Ken Boothe’s Black Gold and Green.

Other highlights include J.C Lodge’s Way Up on a new mix of Curtis Lynch’s relick of Gussie Clark’s Rumors riddim and the four vocalist combination As Mi Forward, where Million Stylez, Etana, Busy Signal and the violently fierce French female deejay Netna rides a particularly ultra heavy riddim. I mean, this isn’t the kind of bass line you bring home to meet your parents.

Curtis Lynch has once again proven that he is a producer to be reckoned with and one that seems to be obsessed with relentless bass lines.

In early 2010 I was asked to contribute to Swedish magazine Reggae Galore. I suggested an interview with UK producer Curtis Lynch who runs the Necessary Mayhem label.

I contacted him and I remember it was difficult to find a date for the interview. When I finally got him on Skype the Internet connection broke down. I gave the interview a few more shots, but it never happened. Until now. For United Reggae, and not Reggae Galore.

I spoke to Curtis a few weeks ago and we discussed some of his many upcoming projects, among them a 2012 sampler titled Future Cuts and a possible album release from the under recorded Jamaican singer Jahmali.

The full story along with a exclusive mix and exclusive photos can be found over at United Reggae.

In the last couple of weeks four interesting EP’s have hit the streets – Rebel Lover Boy from Franz Job, Music Addict by Solo Banton, City of Vibes from Brother Culture and Tony Curtis’ Fight It.

All of these are European productions and the artists are also mainly from Europe, Tony Curtis being the one exception.

Franz Job debut album Babylon is Dead was one of the best albums in 2009, and his newly initiated collaboration with UK producer Curtis Lynch has rendered in a partly new sound. Rebel Lover Boy is harder and more electronic compared to the 70’s sounding debut. However, High is classic Job.

Solo Banton is no stranger to 80’s inspired digital riddims. And on his Jahtari-produced EP Music Addict he flows naturally over Disrupt’s and Rootah’s bouncy riddims. Two of the vocal cuts are also followed by their merciless dub counterparts.

Brother Culture is a veteran on the UK reggae scene and has recorded with a bunch of rough edged producers – Mungo’s Hi-Fi, Dougie Conscious and Ryan Moore to mention only three. His latest effort City of Vibes is however produced by Swiss production team Kinyama Sounds. Their first productions together were for the compilation Reggae Dishes in 2009. Those two songs along with five other organic tunes are collected on the sweet City of Vibes.

Jamaican singer Tony Curtis has been in the spotlight since he won a Jamaican talent contest in the early 90’s. Since then he has released solo material as well as being one fourth of the star-studded vocal group L.U.S.T, alongside Singing Melody, Thriller U and Lukie D. On his six track EP Fight It for Greenyard Records he invites rock stone deejays Burro Banton and Cutty Ranks and sings with his usual rich voice about oppression and romance, with a preponderance for the latter.

Leroy Sibbles started his career as lead singer in the Heptones making his first recordings at legendary studio and label Studio One in the mid 60’s. He soon began to play the bass and also filling a number of roles in the studio conducting auditions, writing songs and making musical arrangements.

He is responsible for some of the most memorable bass lines in the history of reggae music that are still versioned to this day, and one of the latest examples is Curtis Lynch’s relick of the Full Up riddim, probably best known for the Mighty Diamonds’ tune Pass the Kouchie.

I had the opportunity to interview Leroy after the Heptones’ performance at Uppsala Reggae Festival. In the interview he also reveals his favorite contemporary artist and his all-time favorite album. Check the interview at United Reggae.

Sing and dance with Franz Job

Tobago-born London-resident Franz Job was one of the brightest shining stars in 2009, the year his debut album Babylon is Dead was put out.

Two years has gone by and now he’s back with the Curtis Lynch-produced EP Rebel Lover Boy, a set where Franz Job shows a new side of himself – angrier and more electronic.

I got a chat with him on the phone from London. Check the interview over at United Reggae.